Written by Kevin Zhou
Updated over a week ago

At Keyword.com, we give the ability to our users to help them understand the SERP landscape with a single click.

The human eyes can only parse and understand so many lines of data, therefore, we allow the users to segment down and tag groups of keywords to analyze what is going on in the SERPs.

Previously after each Google update, you had to manually dig into all of your important keywords and spend days or weeks digging around to see what happened. Who moved up and down after each update.

Now you can see drastic shifts in the traffic market share within the SERPs -- quickly see the winners and losers after each algorithm update so you can investigate what happened.

This is done by going through each keyword and multiplying the expected CTR * search volume for the site.

Share of Voice does not use the Google Region in its calculations. If there are multiple regions in the Project, Group or Tag they are mixed. Share of Voice data itself doesn’t look at the region just the search volume.

When you are ranking higher in the SERPs, there is a higher CTR, which gives you more clicks in the SERPs due to the higher visibility.

When there are higher search volumes, there are more opportunities for clicks and traffic. We estimate the CTRs (click through rates) of each position in the SERPs and estimate who owns the traffic share.

How are CTRs calculated?

We take industry-standard models of what the CTR figures are and apply it against the search volumes. 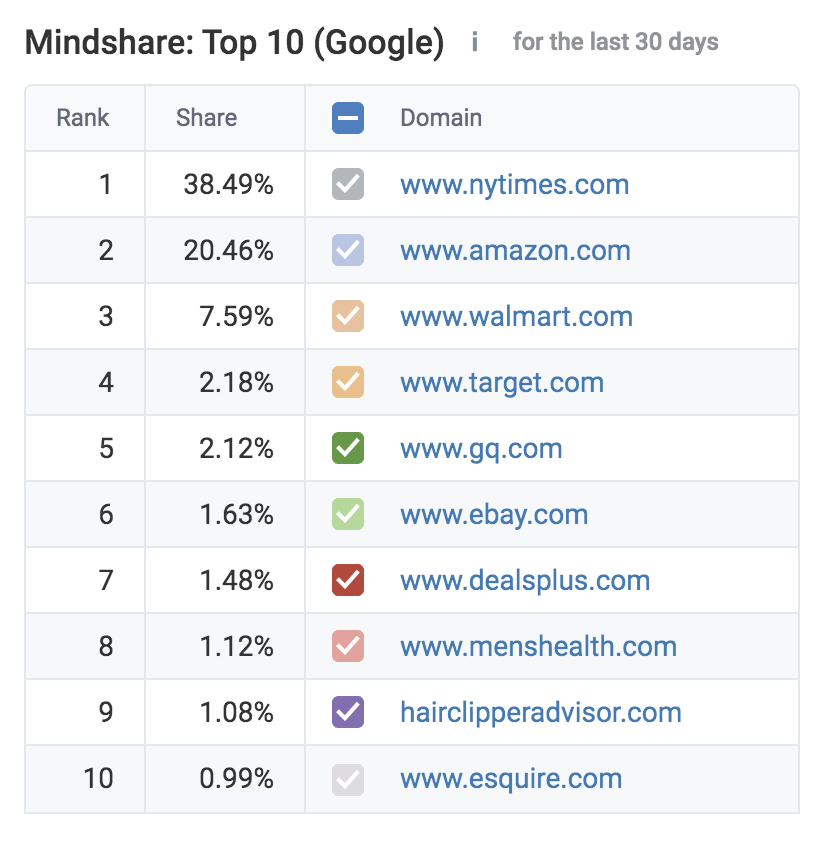 Often if you are working in a company with 50-300+ employees, the CMO has in their mind who their competitors are (based on the biggest brands in the market). But often the SERPs show a different story, with smaller sites, but with better SEO. You are able to show them exactly what's going on.

Show your clients what is going on in the SERPs for each segment of keywords. Often they are so focused on ranking to #1 for a single keyword, but how are they actually doing?

Did this answer your question?